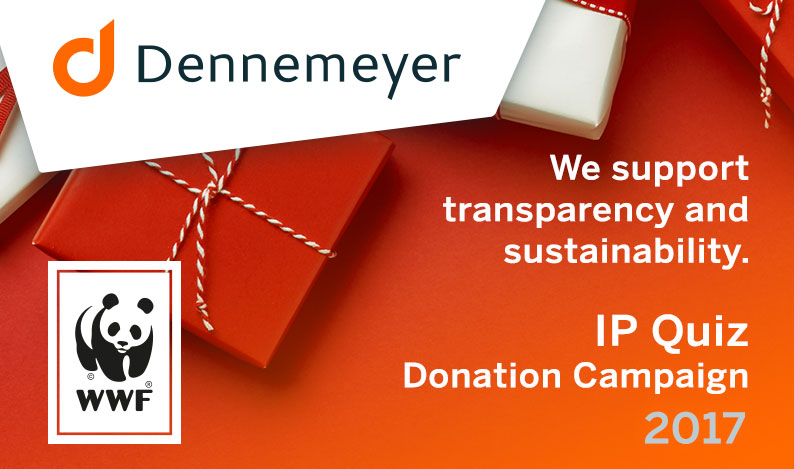 Dennemeyer's 2017 donation campaign had a focus on transparency and the sustainable use of natural resources. Therefore, the recipient of the donation generated through Dennemeyer's IP Christmas Quiz - 20172€ in total - was the World Wide Fund for Nature (WWF), which has repeatedly been ranked among the most transparent NGOs. Besides that, the Romanian entities of the Dennemeyer Group donated more than 35000 Euros to local charity projects. Thanks to the strong support of the quiz players, the overall donation amount sums up to more than 55000 Euros this year.

"As a globally active full-service IP provider, we believe that transparency is the basis for all sustainable business relations," states Nathalie Mühlberger. "This is why we decided to donate the amount generated by our IP Christmas Quiz to the World Wide Fund for Nature this year. The World Wide Fund for Nature is not only an established advocate of sustainability but has also several times been ranked among the most transparent NGOs."

Alexander Mühlberger adds: "We are happy about the great support by our global quiz players and delighted that the new record of more than 1400 played games also made our IP Christmas Quiz donation campaign 2017 the most successful we ever had." 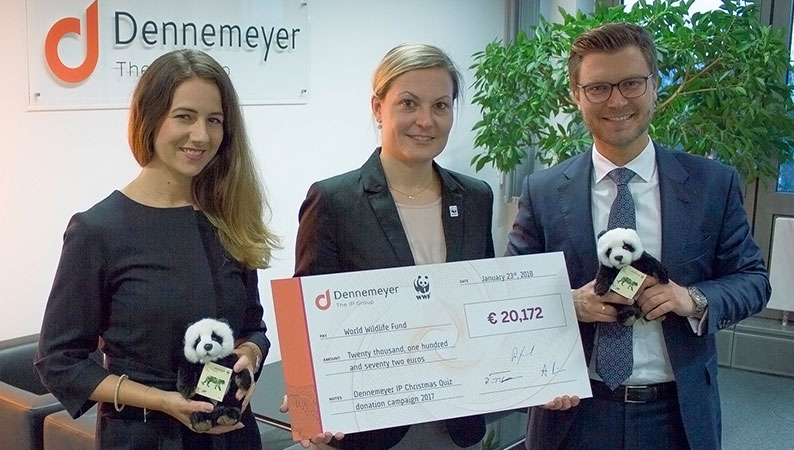 Partners for transparency and sustainability: Nathalie Mühlberger (left), and Alexander Mühlberger (right) supported the WWF, represented by Silke Mayer (middle), with more than 20.000€.

The WWF will use the donation to support various projects with the purpose of protecting nature’s values from the pressing worldwide threats. These include the protection of the most endangered animals and the use of the natural resources to help local communities build up their ability to preserve nature.

The monitorization of the giant panda movement in China is expected to help create green corridors that will link the isolated animals and increase the number of patrol against habitat damages. In Africa, mountain gorillas are included in an ecotourism project which helps reduce the conflict between them and humans, both in the villages and in the national parks.

Panda bears are intensively protected by the WWF as they have to live in protected areas due to the dangers in their habitat. Likewise, mountain gorillas have to be secured from the illegal pet trade. (Source: www.wwf.de)

For each correct answer given in Dennemeyer's IP Christmas Quiz, the IP Group committed itself to donating 2€ to the World Wildlife Fund for Nature (WWF). More than 10,000 correct answers were given in more than 1400 games. But, of course, the IP Christmas Quiz could not have ended without a championship. With an incredible score of 11270 and ten questions answered in less than five minutes, Önder Erol Ünsal has won the final of this year’s IP Christmas Quiz championship. He has been working for the Turkish Patent and Trademark Office as a trademark expert for 20 years and regularly publishes a blog focused on ECJ, EUIPO, USPTO and national Turkish IP decisions. 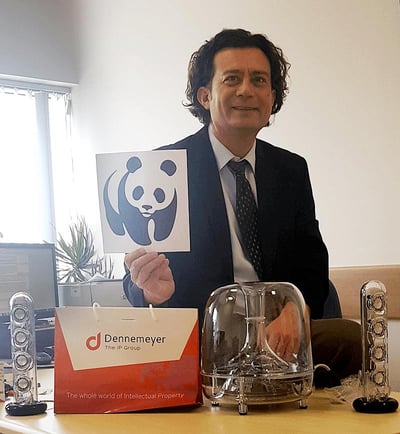 Önder Erol Ünsal, winner of the IP Christmas Quiz championship 2017, with his prize - transparent speakers.
In addition to the IP Christmas Quiz donation campaign, the Dennemeyer Group also supported various charity projects in Romania by donating €35805 to local charity projects. "The Romanian entities helped seven national and local associations in their efforts to support education, medical care and acquisition of high tech equipment for kids, fight poverty and, not lastly, promote the Romanian traditions and culture," said Raluca Judele, Director of Dennemeyer & Associates SRL Romania. Anca Gheorghiu, Director of Dennemeyer SRL Romania, added: "We are happy to support the community and to prove our responsibility towards local sustainability."

Overall, the Dennemeyer Group donated over €55000 to charity projects in 2017. A result to beaten at the end of this year - in the next IP Christmas Quiz.

Join the discussion
Filed in
Related articles
US Federal Circuit: a design can be protected in two dimensions
February 21, 2019
SPCs and new developments in the biotech sector
November 29, 2019
NASA inventions: One small step for man, one giant leap for freeze-dried ice cream
November 15, 2019
Case study: Infringement potential analysis in a complex industry
February 4, 2021
Making the most of your patent drawings
July 7, 2021
Get the updates in your inbox: Subscribe now!