The evolution of trademarks - from ancient Egypt to modern times 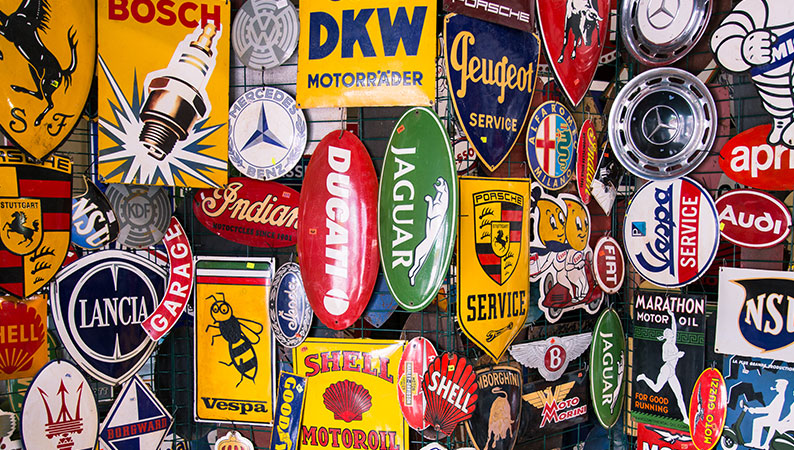 Trademarks have come a long way, from a simple mark left by an ancient artist through the centuries to a knockdown, drag-out fight between Iceland, the frozen food company, and Iceland, the literal country.

Those early craftspeople could not have predicted just how far trademarks would come, or just how many of them the average human would one day be capable of filing away inside a single media-saturated brain. It has been a long and interesting road, though, so let us wander backward along with it for a bit and marvel at how trademarks have transformed and evolved.

Humans have been trademarking stuff since before there was even a word for it. Two thousand years ago, Roman craftspeople left their distinctive marks on pretty much everything they made — tableware, brickwork and roof tiles, decorative vases, gravestones, lead slingshot ammunition, and even plumbing. Those early trademarks had no real legal clout, though. They were mostly just a way to claim creative ownership (bragging rights) over their work. A talented craftsperson could use the mark as a stamp of quality — if you bought a sculpture with the mark of Theophilus, you knew the work was as made-to-last as that giant imperial statue in the city center bearing the same mark.

The Romans were not the only ones doing this. Ancient trademarks can be found on Egyptian and Chinese objects, too, and the Lascaux cave paintings — which predate the Roman empire by around 15,000 years — seem to show that people were using personal marks to claim ownership of livestock long before such a thing became standard practice for craftspeople. 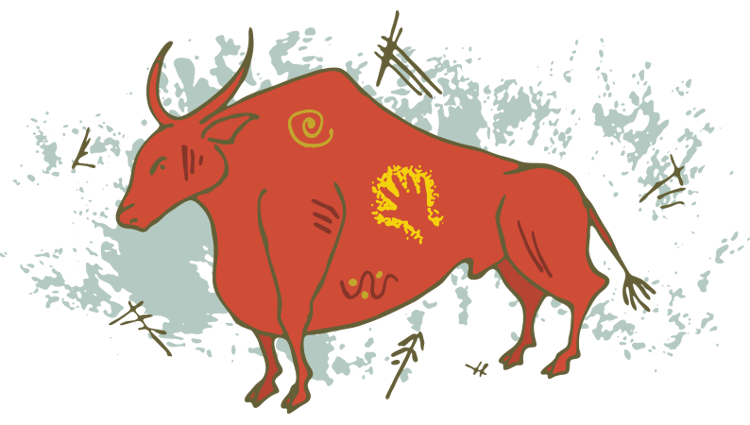 Prehistoric paintings depicted large wild animals and traces of human hands that some believe to be a form of personal claim over a livestock.

Because medieval bread fraud was a thing

We tend to think of trademark law as being a relatively recent development. After all, 800 years ago, people were not walking around wearing branded t-shirts without it actually dawning on them that they had paid for the privilege of being free advertising, so it is not like branding was a major commercial force or anything. That is not to say that trademark infringement never happened, but there were not any laws governing the use and misuse of a trademark, so if you wanted to sell inferior goods with a hijacked mark, the owner of that mark could not turn to the courts for help in attaining justice.

That did change, though, and it did not take as long as you might think. In 1266, King Henry III of England passed the world's first known trademark law, which required bakers to add a distinctive mark to all bread sold, because evidently bread fraud was huge in the mid-1200s. Bakers who failed to comply with the Bakers Marking Law risked heavy fines and the possibility of having to forfeit all unmarked bread. Bread fraud, though? Sort of like how ice cream companies are forever making their containers smaller but still charging exactly the same price because hey, maybe we consumers will not notice, medieval bakers sometimes engaged in the shady practice of making their loaves a little smaller than they were supposed to be. The mandatory mark meant bakers who cheated their customers out of an ounce or two of rye could be tracked down and brought to justice. That probably never resulted in any unfair convictions or anything. Also, when are they going to start doing that with ice cream makers? 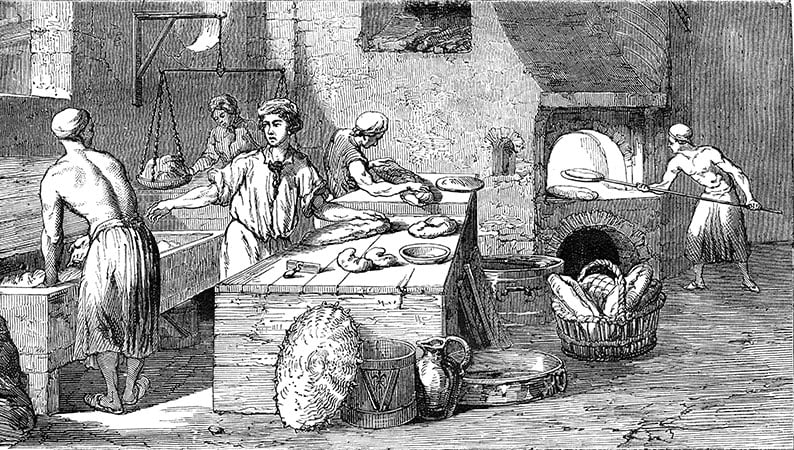 The first trademark legislation in the world was passed by the Parliament of England under the reign of King Henry III in 1266. It required all bread makers to place a mark on the bread they sold.

The dawn of trademark infringement

By the 13th century, trademark infringement was becoming common, and many European courts were set up to do something about it. French law recognized trademarks as property, and the courts were handing down some brutal rulings about their infringement, sometimes even ultimate-punishment type stuff. According to a French edict dated 1544, infringers could have their hands cut off, and that was tame compared to an earlier edict issued in the 14th century, which declared that an innkeeper so bold as to sell common wine under a fraudulent label could be punished by hanging. The French have always taken their wine very seriously, though, have they not?

The world's first comprehensive, modern trademark law was the French Manufacture and Goods Mark Act, which passed in 1857. In 1862, England passed the "Merchandise Marks Act," which established consequences for companies that sold products with fake trademarks, but it did not pass a comprehensive set of trademark laws until much later, in 1905.

United States trademark law went through a few incarnations before arriving in modern times. The 1870 federal trademark regime was struck down by the Supreme Court and replaced by a new act in 1881. In 1905 the law was revised, and in 1946 the Lanham Act spelled out federal trademark protection and registration rules. 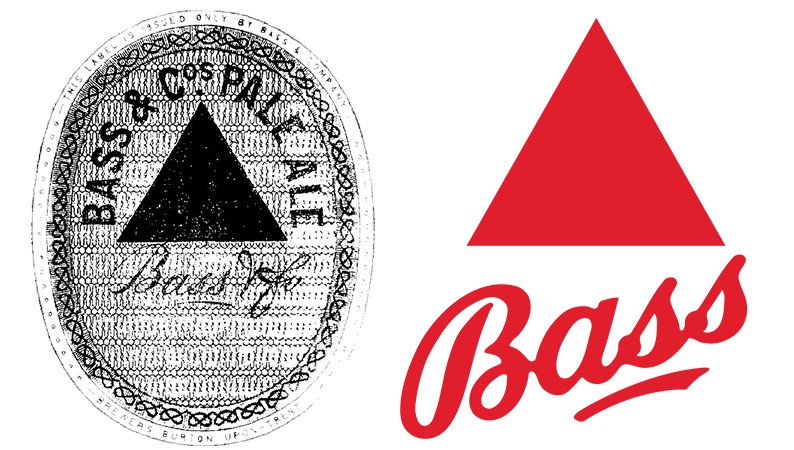 In Britain, the Trade Marks Registration Act came into effect on January 1, 1876. That morning, a Bass Brewery employee who rang in the New Year by queuing outside the building was the first to register a trademark with UK Patent Office. The logo on the left is one of the oldest trademarks in the world.

In America, the first brand to register a trademark under the US Federal Trademark Act of 1870 was the Averill Chemical Paint Company. Averill registered a logo — an eagle with a ribbon — along with the words "Economical, Brilliant." Sadly, Averill's trademark did not help it stay in business or anything. That paint company has gone the way of so many other forgotten businesses, even though its logo was infinitely better than that one paint company logo where someone is dumping a can of paint over the entire planet, and that is supposed to make somehow consumers want to buy a can of eggshell white.

Anyway, you have to fast forward fourteen years to find a United States trademark that is still in use today. The honor of the oldest active US trademark goes to the J.P. Tolman Company (now called Samson Rope), which registered an image of the Biblical Samson wrestling a lion way back in 1884.

Today, trademarks can be vigorously defended in court, making it possible for businesses to establish and protect the easily-identifiable brand symbols and phrases that allow them to thrive in the complicated and challenging environment of modern business. Occasionally, trademarks also give media-watchers an epic battle, like Starbucks vs. Sambucks, Elvis Presley vs. Brewdog, and our personal favorite, Iceland vs. Iceland.

Facebook LinkedIn Twitter Website
Join the discussion
Filed in
Latest
The USPTO dismisses key argument of Inter Miami in their trademark match versus Inter Milan February 20, 2020
Surprising new developments in the Italian trademark law February 18, 2020
How blockchain technology will impact our legal system February 13, 2020
The top 10 rules of Intellectual Property docketing February 11, 2020
Greatest inventions to watch for in 2020 February 6, 2020
Get the updates in your inbox: Subscribe now!